The mission of the NASA’s Mars 2020 Perseverance Rover ​is to search for signs of ancient life, collect samples for the future return to Earth and help pave the way for human exploration. The rover will carry with it several technology demonstrations including a helicopter, which will attempt humanity’s first powered flight on another planet. Perseverance has a new set of science instruments and the ability to “self-drive” on the Martian surface.

Overview Of The Perseverance Mars Rover

The Landing Sequence: 7 Minutes of Terror

The landing sequence for rovers onto the surface of Mars is known as the “7 minutes of terror” because of the distance and time delay between Mars and Earth. The entry and landing on Mars is completely autonomous for the spacecraft and lander, as there is no way for controllers on Earth to manage it in real-time.

As a result, by the time that the team at NASA gets a message from the space craft that it is entering the atmosphere of Mars, the spacecraft will have either successfully (or unsuccessfully) landed on Mars. Figure 1 below outlines the steps to slowing down from 39.600 kph to 0 kph on the surface of Mars. The Mars Perseverance spacecraft is made of 5 primary components. During the entry sequence, Perseverance will shed 4 of the 5 elements, leaving the Perseverance Rover safely on the surface of Mars. 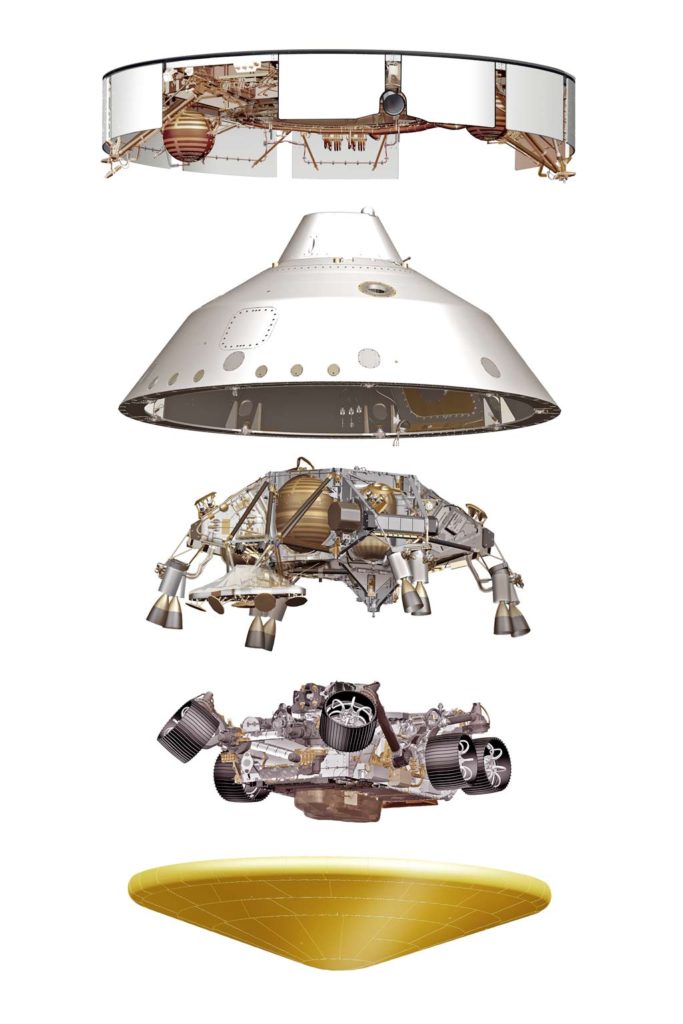 The magic of the entry sequence occurs at the very last step, when a “space crane” slows the vehicle down and gently places the Perseverance rover on the surface via a set of straps. The rockets engine powered crane then cuts the straps and flies off for a crash landing, as far as possible from the Perseverance rover.

This touchdown concept was successfully used for Mars Curiosity rover placement on Mars. There are are a couple of key mission goals for Perseverance.

The Ingenuity Helicopter is a unique experiment for this mission. It will be the first time that humans attempt powered, autonomous flight on another planet.

To Learn More About Mars Perseverance