Knightscope’s long-term vision is to predict and prevent crime utilizing autonomous robots, analytics and engagement. Crime has a $1+ trillion negative economic impact on the U.S. economy every year and Knightscope is on a mission to cut it in half. Founded in April 2013 in Silicon Valley, Knightscope is a leader in developing autonomous physical security solutions. The Knightscope “Hardware + Software + Humans” approach reduces costs for our clients, provides a 24/7 force multiplier effect as well as advanced anomaly detection capabilities. Our solution includes providing an autonomous physical presence, gathering data from the environment in real-time, and pushing anomalies to our user interface, the Knightscope Security Operations Center (KSOC)

Knightscope came to market initially with their K3 and K5 robot solutions for indoor and outdoor patrolling operations. The Knightscope vehicles are equipped with a variety of sensors, including microphones and cameras (in addition to their navigational sensors). The vehicles are able to autonomously patrol a facility and they extend the reach and presence of your human security staff. When the robots sense something out of place, they are able to immediately alert your human security staff who can then evaluate the situation. The vehicles are always online, either through site WiFi or a cellular connection.

The K3 robot is designed for indoor operation while the K5 is designed for outdoor operation on paved surfaces. Both vehicles can operate collaboratively and safely around employees and the public. The K3 and K5 robots have been deployed successfully into malls, hospital and corporate campuses.

In the last year, Knightscope as extended their product line with the launch of the K7 and K1 robots. The K1 robot is designed as a stationary robot which includes all of the sensing technology of the Knightscope platform (sans navigation -> it’s stationary). In addition, the K1 includes sub-millimeter scanning technology to look for concealed weapons. The K1 is designed to stand at facility entrances and watch the entry and exit of people, while providing remote interaction for human security guards.

The K7 is a unique mobile robot. It is the largest autonomous mobile robot on the security market today and it is designed for off-road navigation of large facilities such as oil & gas, large manufacturing facilities, corporate campuses. As you can see in the image above, it is the size of a sub-compact car, and includes 4 point independent steering to enable it to maneuver in tight spaces. 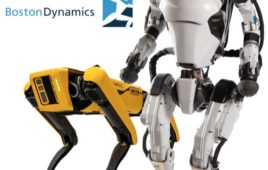